A star is born – Story of ‘Tara’ – SOFOSH DHADPHALE CENTRE

It was New Year’s Day 15 years ago. A child was brought wrapped in folds of a faded cotton sari, the only legacy he had inherited from the parents who cast him away, probably under
desperate circumstances. The 6-month infant had spent the night in a deserted corner of the platform at Pune’s railway station. The maternal instinct of a stray dog had kept him warm through a very chilly night as she kept the baby close to her furry body. It was the platform urchins who stumbled upon this unusual treasure in the early hours of the morning and alerted the police.

The baby did not cry, for he was mute. Now his large brown eyes met the scrutiny of the social workers gaze but he could not see the compassion in them, for he was blind. We will call you Rahul, little one, she said, but he could not hear, for he was deaf too! A male child with soft fair skin abandoned because he wasdeaf, dumb, blind and also mentally challenged.

He came to live among 60 other children at ‘Shreevatsa’ childcare center run by SOFOSH. Unable to express his needs he was tended to by over-stretched members of the staff. As Rahul grew his needs grew with him and we searched for a foster home where he would get more individual attention, which he so greatly needed. Rahul was six years old when he went to a foster care arrangement with 4 other mentally and physically challenged children.

One summer afternoon, a few years later, we paid a visit to yet another institution where he had just been shifted. Rahul was lying on his stomach close to his friend Maya. The soft skin of his back was covered with a thick black blanket it was a blanket woven of a thousand flies! Rahul did not flinch. He could not flinch. 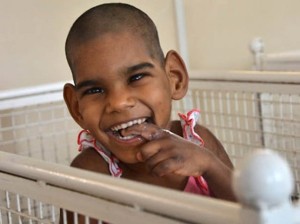 Rahul was indeed deprived of all the facilities, which make life worth living. Yet here he was among us year after year so gratefully accepting the little chores done for him, completely dependent upon someone else understanding his basic needs.

We brought him back to our child care center where his cheerful fraternity of family deprived children often reached out to this unusual child– the only child in their midst who never cried. One night Rahul was racked by a terrible seizure. His body contorted and his eyes rolled back. His last breath carried his spirit from his tormented body– the release he must have longed for. There was a haunting silence as his frail body was carried out of the home, which had cared for him over 8 years of his life. His departure should have brought relief to our overworked childcare staff but instead his empty crib left a painful vacuum in our midst.

It was on that day we truly realized that the relationship with such a helpless being is by no means a one-way relationship. We had tended to Rahul’s basic needs and given him a little of our time each day. In return he had given us everything he possessed– his love, his gratitude and his life. He had made us feel worthy and wanted, bringing meaning and value to each day of our lives, which we so briefly shared with him. 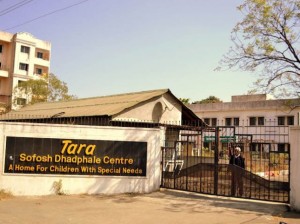 Rahul’s cot did not remain empty for long. His mentally challenged companion, Maya moved in there soon after she lost her friend. 30 other cots are filled with children for whom life is so severely challenged. They are our fellow beings in the journey of life. They must be in this world with a meaning and a purpose.

Sadly there are also many children among these who are physically and mentally challenged and these little ones are now being looked after at TARA SOFOSH Dhadphale Centre, a spacious home designed for such unfortunate and special needs children. These children 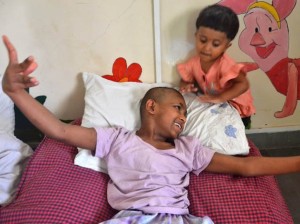 have a little or no hope to be resettled through adoption. Under the protective care of our social workers and their unconditional love, these children confront their mental, physical and social challenges in life. This centre is situated at Pimpale Gurav, on the outskirts of the Pune city.