Dahi Handi was celebrated with great enthusiasm to mark the birth of Lord Krishna.
Children were dressed in traditional clothes and the danced to the tune of traditional songs to suit the occasion. 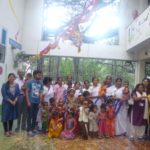 Dahi Handi is one of the festive events and a team sport during the festival Gokulashtami, which is also known as Krishna Janmashtami and celebrates the birth of Krishna. Dahi Handi is celebrated every August/September, the day after Krishna Janmashtami. It involves communities hanging an earthen pot filled with dahi (yogurt) or other milk-based delicacy, at a convenient or difficult to reach height. Young men and boys form teams, make a human pyramid and attempt to reach or break the pot. As they do so, girls surround them, sing with music, and cheer them on. It is a public spectacle, with media attendance, prize money and commercial sponsorships. The event is based on the legend of the Krishna stealing butter and other milk products as a baby, the community hiding the products by hanging them high out of his reach, but he finding creative ways to reach what he wanted.

The teachers at Shreevatsa were felicitated and the children thanked them for all their efforts. A girl from Shreevatsa, played the role of a teacher and taught the other children. 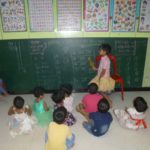 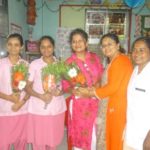 Teacher imparts good value in children and turn them into responsible citizens. So, almost every country celebrates Teacher’s Day. In India, we celebrate this day on the birthday of Dr. Sarvepalli Radhakrishnan who was the first Vice President of India. He was a man of many good qualities and a favorite teacher among students.Teachers’ Day is a special day for the appreciation of teachers, and may include celebrations to honor them for their special contributions in a particular field area, or the community in general.

The bullocks are of great help to the farmers. And we depend on farmers for food. Bailpola is celebrated to express our gratitude towards the bullocks.
Small earthen bullock idols were worshiped and the importance of the festival was explained to the children. 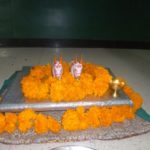 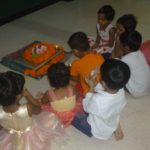 Pola is mainly a farmer’s festival, wherein farmers respect their bulls and oxe, to thank them for their support in farming. It occurs after the monsoon sowing and field work, typically in late August or early September. On the day of Pola, the bulls are first given a bath, and then decorated with ornaments and shawls. Their horns are painted, and their necks are adorned with garlands of flowers. The bulls do not work that day, and they are part of procession where farmers celebrate the crop season.The work of decorating bulls, accompanied by the music and dancing, are carried out in the evenings. The first bullock to go out is an old bullock with a wooden frame (called makhar) tied on its horns. This bullock is made to break a rope of mango leaves stretched between two posts, and is followed by all the other cattle in the village.

Like every year the Ganpati festival was celebrated with pomp and grandeur at Shreevatsa, right from the ‘sthapana’ to ‘visarjan’. We had many senior volunteers, wellwishers, committee members visiting Shreevatsa for the Aarti. The beautiful decoration was done by volunteers of the SPARSH group. On the last day of the festival, the staff and children ceremoniously bid goodbye to the beloved lord Ganesha. 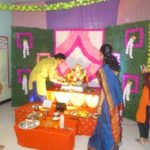 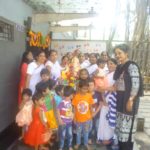 Ganesh Chaturthi, also known as Vinayaka Chaturthi is the Hindu festival that reveres god Ganesha. A ten day festival, it starts on the fourth day of Hindu luni-solar calendar month Bhadrapada, which typically falls in Gregorian months of August or September. The festival is marked with installation of Ganesha idols privately in homes, or publicly on elaborate pandals (temporary stage). The festival ends on the tenth day after start, wherein the idol is carried in a public procession with music and group chanting, then immersed in nearby water body such as a river or ocean, thereafter the clay idol dissolves and Ganesha is believed to return to Mount Kailash to Parvati and Shiva.