Children had a lot of fun during the 10 days of Ganesh Utsav. On the last day of the festival, the staff and children ceremoniously bid goodbye to the beloved lord Ganesha. 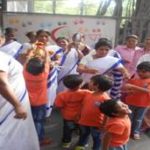 Ganpati Visarjan is done on Anant Chaturdashi which is fourteenth day of lunar fortnight. All the Ganesh deities that are brought into homes and communities on fourth day of lunar fortnight i.e. Ganesh Chaturthi, are immersed in the sea or nearby lakes and rivers. On this day, people travel to the waterfront with the idols, large and small, dancing and singing in large processions. Lord Ganesha is departed, only to be welcomed the next year with equal excitement.

A cultural program was arranged in the Revachand Bhojwani academy on the occasion of Navratri.
Children were dressed in traditional clothes and participated in the dandiya organized for them. 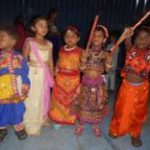 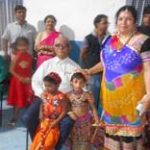 Children danced to the tune of the traditional Marathi songs sung for Bhondla encircling the elephant picture drawn in the centre. This celebration is to mark the end of rainy season and a grand welcome to the harvest season.

Navratri is a nine nights (ten days) festival, celebrated in the autumn every year. It is observed for different reasons and celebrated differently in various parts of the Indian subcontinent. It is the post-monsoon autumn festival observed in the honour of the divine feminine Devi (Durga). Celebrations include stage decorations, recital of the legend, enacting of the story, and chanting of the scriptures.
The most visible is group dances from villages to towns called Garba played by clapping hands and Dandiya played by small decorated sticks accompanied by live orchestra, seasonal raga, or devotional songs. It is a folk dance, where people of different background and skills join and form concentric circles.

Also during the nine days, Bhondla is celebrated in the garden or on the terrace during evening hours by inviting female friends of the daughter in the house. An elephant is drawn either with rangoli on the soil or with a chalk on a slate and kept in the middle. The girls go around it in a circle, holding each other’s hands and singing Bhondla songs. All Bhondla songs are traditional songs passed down through the generations. Khirapat a special dish or dishes often made laboriously by the mother of the host girl is then served. The food is served only after the rest of the girls have guessed what the covered dish or dishes are correctly.

Dussera was celebrated as per the Maharashtrian tradition. Saraswati Pooja was performed and children were told stories related to Dussera. Children enjoyed a special meal made on this occasion. 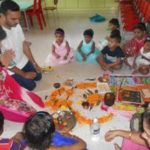 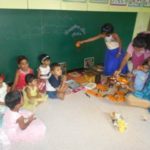 Dussera also known as Vijayadashami is a festival celebrated at the end of Navratri every year. It is observed on the tenth day in the Hindu calendar month of Ashvin, which typically falls in the Gregorian months of September and October.

Vijayadashami celebrations include processions to a river or ocean front that carry clay statues of Durga, Lakshmi, Saraswati, accompanied by music and chants, after which the images are immersed into the water for dissolution and a goodbye. Elsewhere, on Dussera, the towering effigies of Ravana symbolizing the evil are burnt with fireworks marking evil’s destruction.

Another significant and notable tradition has been the dedication of this festival to Saraswati, the Hindu goddess of knowledge, learning, music and arts. She is worshipped, along with instruments of one’s trade during this festival.