The children were taken to the ward where Gandhiji was admitted in the year 1924 in the Sassoon Hospital. Children were given information about Gandhiji. 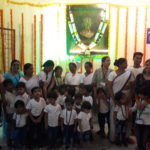 Gandhi Jayanti is an event celebrated in India to mark the birth anniversary of Mahatama Gandhi, born 2 October 1869. It is celebrated annually on 2 October, and it is one of the three national holidays of India.Gandhi Jayanti is marked by prayer services and tributes all over India, including at Gandhi’s memorial Raj Ghat in New Delhi where he was cremated. Popular activities include prayer meetings, commemorative ceremonies in different cities by colleges, local government institutions etc.

There was Dandiya and Bhondla celebrated at the children’s school and at Shreevatsa too. 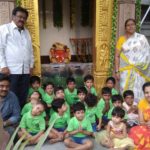 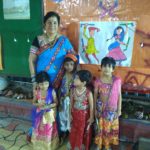 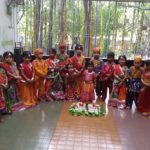 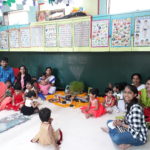 Navratri is a nine nights (ten days) festival, celebrated in the autumn every year. It is the post-monsoon autumn festival observed in the honour of the divine feminine Devi (Durga). The most visible is group dances from villages to towns called Garba played by clapping hands and Dandiya played by small decorated sticks accompanied by live orchestra, seasonal raga, or devotional songs. It is a folk dance, where people of different background and skills join and form concentric circles.

Also during the nine days, Bhondla is celebrated in the garden or on the terrace during evening hours by inviting female friends of the daughter in the house. An elephant is drawn either with rangoli on the soil or with a chalk on a slate and kept in the middle. The girls go around it in a circle, holding each other’s hands and singing Bhondla songs. Khirapat a special dish or dishes often made laboriously by the mother of the host girl is then served.

Dussera also known as Vijayadashami is a festival celebrated at the end of Navratri every year. It is observed on the tenth day in the Hindu calendar month of Ashvin, which typically falls in the Gregorian months of September and October. Vijayadashami celebrations include processions to a river or ocean front that carry clay statues of Durga, Lakshmi, Saraswati, accompanied by music and chants, after which the images are immersed into the water for dissolution and a goodbye.

Children were engaged in painting of Diyas, making miniature clay fort and paper lanterns for Diwali. During the Diwali festival; Laxmi pujan, Padwa- Deepotsav and Bhaubeej were celebrated as per the local tradition. 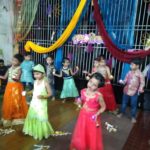 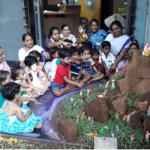 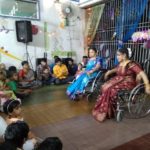 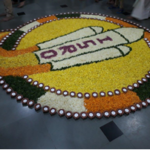 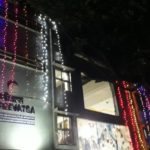 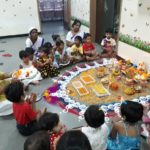 Diwali is also called Festival of Lights and it is celebrated in the Hindu month of Kartika which falls sometime during October or November. It is celebrated to mark the return of Lord Rama from 14 years of Exile and his victory over the Demon Ravana. In many parts of India, Diwali is celebrated for 5 consecutive days and is one of the most popular festivals in India. Before Diwali night, people clean, renovate, and decorate their homes and offices. They make paper lanterns which are placed outside their houses, paint diyas (lamps and candles) which they light up inside and outside their houses. A small miniature clay fort is made by the kids outside the house and decorated. People dress up in new clothes or their best outfits, prepare sweets and exchange gifts between family and friends.

Laxmi Puja is a religious festival that falls on Amavasya (new moon day) of Krishna Paksha (Dark fortnight) in the Hindu calendar month of Ashwin on the third day of Diwali and is considered as the main festive day of Diwali. According to legend, Laxmi, the goddess of wealth visits her devotees and bestows gifts and blessings upon each of them. Laxmi is believed to roam the earth on Diwali night. On the evening of Diwali, people open their doors and windows to welcome Lakshmi, and place diya lights on their windowsills and balcony ledges to invite her in. To welcome the Goddess, devotees clean their houses, decorate them with finery and lights, and prepare sweet treats and delicacies as offerings. Devotees believe the happier Lakshmi is with the visit, the more she blesses the family with health and wealth.