A small decorated “Palkhi” was taken around in the premises of Shreevatsa to mark the occasion of Ashadhi Ekadashi. Children were dressed like the “warkaris”. 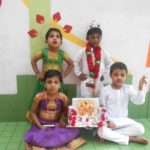 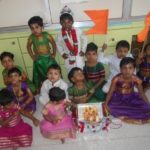 Pandharpur Wari is an annual pilgrimage to Pandharpur – the seat of God Vithoba in the Indian state of Maharashtra, in honour of the deity. Palakhis (palanquin processions) carrying the paduka (foot prints) of various saints – most notably Dnyaneshwar and Tukaram – from the Warkari, (one who performs the Wari), are taken from their respective shrines to Pandharpur. The tradition is more than 700 to 800 years old. The journey takes 21 days.Numerous palakhis join the main Tukaram and Dnyaneshwar palkhis. The wari culminates at the Vithoba temple on Ashadhi Ekadashi which is the eleventh lunar day of the bright fortnight of the Hindu month of Ashadha (June – July).

The importance of “GURU” was explained to the children on the day of Guru Purnima. Children showed thankfulness towards their teachers by reciting songs and prayers. A class was conducted by an older child for the younger children. 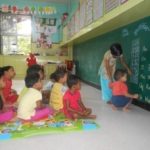 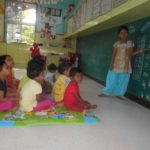 Guru Purnima is a festival dedicated to spiritual and academic teachers. This festival is traditionally celebrated to pay their respects to their teachers and express their gratitude. The festival is celebrated on the full moon day (Purnima) in the Hindu month of Ashadha (June–July). This day marks the first peak of the lunar cycle after the peak of the solar cycle.

The month of Shravan is full of festivals and Nagpanchami is the first. The children were happy to make a cobra idol out of clay and worship it. The importance of all the elements in the nature was explained to the children. 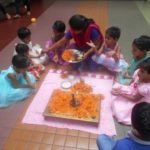 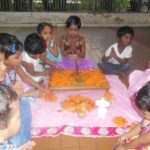 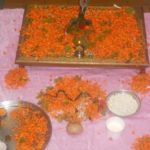 Nag Panchami is a traditional worship of snakes or serpents. The worship is offered on the fifth day of bright half of Lunar month of Shravan (July/August), according to the Hindu calendar. The abode of snakes is believed to be patal lok, (the seven realms of the universe located below the earth) and lowest of them is also called Naga-loka, the region of the Nagas, as part of the creation force and their blessings are sought for the welfare of the family. Serpent deity made of silver, stone or wood or the painting of snakes on the wall are given a bath with milk and then revered.

We had a monthly birthday party at Shreevatsa to celebrate the birthdays of the children falling in the month of July. Fun games and music was arranged for children followed by cake cutting. 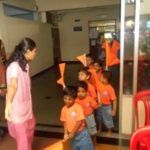 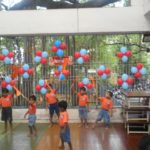 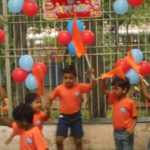