The month of Shravan is full of festivals and Nagpanchami is the first. This year it was celebrated on 5 th August. A clay cobra idol was worshipped and the children were happy to play the traditional games played on the occasion of this festival. The importance of all the elements in the nature was explained to the children. 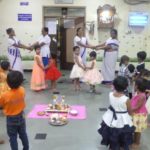 Naga Panchami is a traditional worship of snakes or serpents observed throughout India. The worship is offered on the fifth day of bright half of Lunar month of Shravana (July/August), according to the Hindu calendar. The abode of snakes is believed to be patala loka, (the seven realms of the universe located below the earth) and lowest of them is also called Naga-loka, the region of the Nagas, as part of the creation force and their blessings are sought for the welfare of the family. Serpent deity made of silver, stone or wood or the painting of snakes on the wall are given a bath with milk and then revered.

On the occasion of the Independence day of India the children were dressed in white. Our National Flag was hoisted by PSI Godse from Bund Garden Police station, Pune. Children participated in flag hoisting and sang the National Anthem with all other participants. This year Raksha Bandhan and Independence day fell on the same day. So children had a joint celebration. They tied rakhis to each other to celebrate the joyous occasion of Raksha Bandhan. The rakhis too were made with the help of the volunteers at Shreevatsa.The children also enjoyed the paneer, pulao and gulab jamun specially made for this occasion. 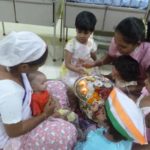 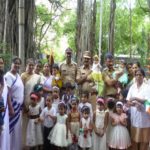 Independence Day is annually celebrated on 15 August, as a national holiday in India commemorating the nation’s independence from the United Kingdom on 15 August 1947, the UK Parliament passed the Indian Independence Act 1947 transferring legislative sovereignty to the Indian Constituent Assembly. India attained independence following the Independence Movement noted for largely non-violent resistance and civil disobedience led by the Indian National Congress (INC). The holiday is observed throughout India with flag-hoisting ceremonies, parades and cultural events.

Raksha Bandhan is observed on the last day of the Hindu lunar calendar month of Shraavana, which typically falls in August. The expression “Raksha Bandhan,” Sanskrit, literally, “the bond of protection, obligation, or care,” is now principally applied to this ritual. On this day, sisters of all ages tie a talisman, or amulet, called the rakhi, around the wrists of their brothers, symbolically protecting them, receiving a gift in return, and traditionally investing the brothers with a share of the responsibility of their potential care.

Children were dressed in fine clothes and had a great feast of sweets on the occasion of Bakri Eid. 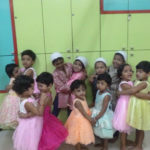 Dahi Handi was celebrated with great enthusiasm to mark the birth of Lord Krishna. Children were dressed in traditional clothes and the danced to the tune of traditional songs to suit the occasion. 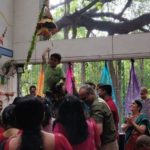 Dahi Handi is one of the festive events and a team sport during the festival Gokulashtami, which is also known as Krishna Janmashtami and celebrates the birth of Krishna. Dahi Handi is celebrated every August/September, the day after Krishna Janmashtami. It involves communities hanging an earthen pot filled with dahi (yogurt) or other milk-based delicacy, at a convenient or difficult to reach height. Young men and boys form teams, make a human pyramid and attempt to reach or break the pot. As they do so, girls surround them, sing with music, and cheer them on. It is a public spectacle, with media attendance, prize money and commercial sponsorships. The event is based on the legend of the Krishna stealing butter and other milk products as a baby, the community hiding the products by hanging them high out of his reach, but he finding creative ways to reach what he wanted.

Monthly birthday was celebrated with cake cutting, music and dance performances by the volunteers and children. 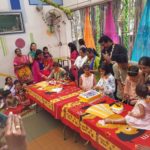