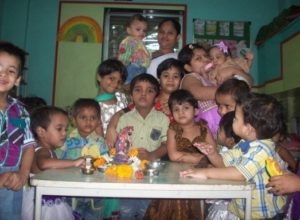 The month of Shravan is full of festivals and Nagpanchami is the first . The children were happy to make a cobra idol out of clay and worship it. The importance of all the elements in the nature was explained to the children.


Nag Panchami is a traditional worship of snakes or serpents observed by Hindus throughout India, Nepal and other countries where Hindu adherents live. The worship is offered on the fifth day of bright half of Lunar month of Shravan (July/August), according to the Hindu calendar. The abode of snakes is believed to be patal lok, (the seven realms of the universe located below the earth) and lowest of them is also called Naga-loka, the region of the Nagas, as part of the creation force and their blessings are sought for the welfare of the family. Serpent deity made of silver, stone or wood or the painting of snakes on the wall are given a bath with milk and then revered.

According to Hindu puranic literature, Kashyapa, son of Lord Brahma, the creator had four consorts and the third wife was Kadroo who belonged to the Naga race of the Pitru Loka and she gave birth to the Nagas; among the other three, the first wife gave birth to Devas, the second to Garuda and the fourth to Daityas.

Independence Day, is annually observed on 15 August as a national holiday in India commemorating the nation’s independence from the British Empire on 15 August 1947. India attained independence following an Independence Movement noted for largely nonviolent resistance and civil disobedience led by the Indian National Congress (INC). Independence coincided with the partition of India, in which the British Indian Empire was divided along religious lines into the Dominions of India and Pakistan; the partition was accompanied by violent riots and mass casualties, and the displacement of nearly 15 million people due to sectarian violence. On 15 August 1947, Jawaharlal Nehru, who had become the first Prime Minister of India that day, raised the Indian national flag above the Lahori Gate of the Red Fort in Delhi. On each subsequent Independence Day, the prime minister has raised the flag and given a speech.

The holiday is observed throughout India with flag-hoisting ceremonies, parades and cultural events.There is a national holiday and schools and government offices distribute sweets but no official work is done. 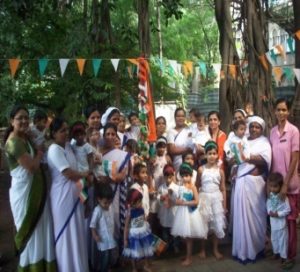 On the occasion of the 70th Independence day of India the children were dressed traditionally in white . Our National Flag was hoisted and the children sang the National Anthem with all other participants. 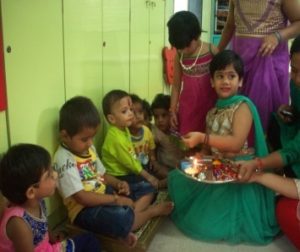 Children from the Shreevatsa tied rakhis to each other to celebrate the joyous occasion of rakshabandhan. The children as well as the volunteers celebrated this event. The children also enjoyed the puri bhaji and shreekhand specially made for this occasion.

Raksha Bandhan, also called Rakhi Purnima or simply Rakhi in many parts of India, is a Hindu religious and secular festival. In simple words, Raksha bandhan means “Bond of Protection”. The festival celebrates the love and duty between brothers and sisters. It is also popularly used to celebrate any brother-sister relationship between men and women who may or may not be biologically related.

On Raksha Bandhan, sisters tie a rakhi (sacred thread) on her brother’s wrist. This symbolizes the sister’s love and prayers for her brother’s well-being, and the brother’s lifelong vow to protect her. The festival falls on the full moon day (Shravan Poornima) of the Shravan month of the Hindu lunisolar calendar.

Dahi Handi (dahi: curd, handi: earthen pot) is an Indian festival, celebrated every August/September, that involves making a human pyramid and breaking an earthen pot filled with curd tied at a convenient/difficult height. This event is based on the legend of the child-god Krishna stealing butter. A participant in this festival is called a govinda or govinda pathak. It is mostly popular in the state of Maharashtra. It is part of the main festival Gokulashtami, which is known as Krishna Janmashtami in the rest of the country, and celebrates the birth of Krishna. 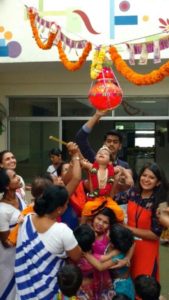 A terracotta matka was filled with chocolates, biscuits and other tasty sweet treats for the children, was hung in the play area. The children, volunteers and staff  danced  on the traditional songs to suit the occasion. The matka was broken by the  kids by making a pyramid . The kids were showered with chocolates and sweets . All enjoyed  Dahi handi thoroughly .